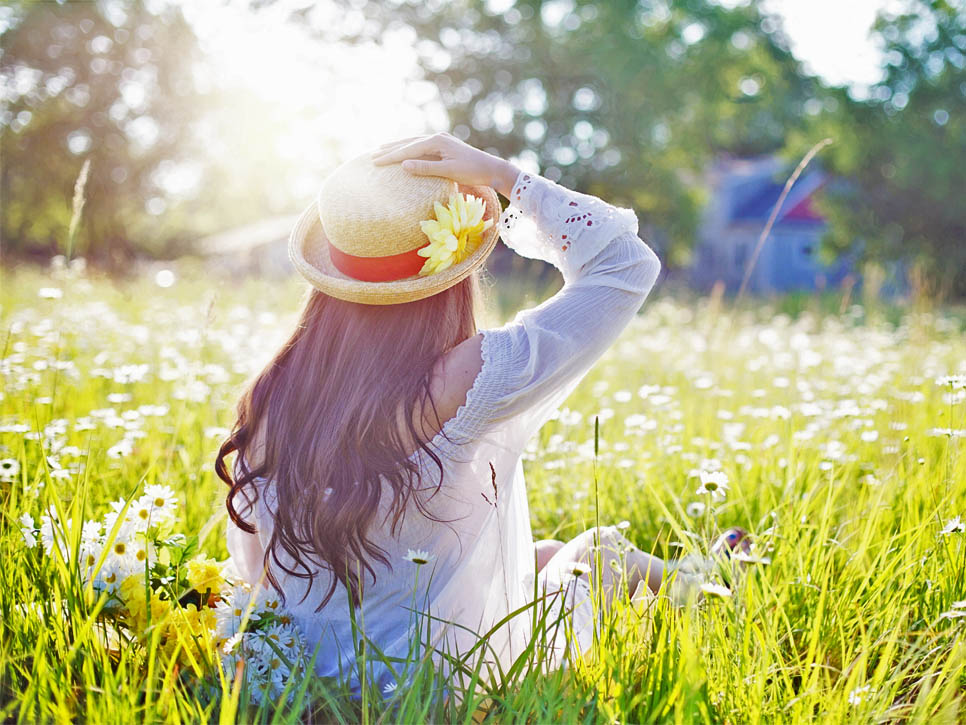 Have you ever noticed how “blah” you feel after spending the entire day inside?  That feeling isn’t just psychological.  It has its roots in the physiology of the human body.

Specifically, that sluggish feeling is caused by too much melatonin, a powerful hormone that is released at night to induce sleep and modify other hormone secretions.  Naturally, our bodies stop making melatonin when exposed to daylight so we don’t feel sleepy during the day.  But more often than not, instead of bright, full-spectrum light, we are exposed to artificial light, which studies confirm is inadequate to shut off melatonin production.

The result?  Depression, oversleeping, overeating, general fatigue, and, in some people, seasonal affective disorder (SAD).  Though the best light for suppressing melatonin is daylight, research has shown that bright, full-spectrum bulbs can also do the trick if used in significant duration.  In studies conducted at the National Institute of Mental Health, two hours of bright full-spectrum light at midday or four hours of natural evening light were as effective as two hours of morning light.

Melatonin levels are found to be very high in patients with SAD or depression.
Daily exposure to sunlight or to full-spectrum light has been known to eliminate such symptoms.

According to researchers, Americans spend 90% of their time indoors under artificial lighting, which can cause fatigue, vision problems, headaches, eyestrain, irritability, hyperactivity in children, and increased risk of osteoporosis.  It can also produce changes in heart rate, blood pressure, electrical brain wave patterns, hormone secretions, and the body’s natural cyclical rhythms.  Even if you do not experience these symptoms, artificial light is not healthy for you because it lacks the full wavelength spectrum found in sunlight that people MUST have to maintain health.  According to research and the numerous published studies of photobiologist John Nash Ott, Doctor of Science, light that does not contain a balanced spectrum of wavelengths interferes with the body’s optimal absorption of certain nutrients, a condition Dr. Ott calls “malillumination.”

Laboratory studies now show that Vitamin D (which is stimulated by ultraviolet light) suppresses the growth of malignant melanoma cells.

This– the bombshell forcing dermatologists to stop telling their fair-skinned patients to pursue indoor occupations–is causing quite a stir in the medical community as they acknowledge that it is the deprivation of sunlight, leading to Vitamin D deficiency, that plays a part in the development of melanoma, not the reverse.

A study carried out by the U.S. Navy concurs.  In the study, researchers compared the risk of melanoma cancer for different naval occupations and discovered that personnel holding indoor occupations had the highest incidence rate of melanoma while workers in occupations that required spending their time both indoors and outdoors had the lowest rate.  The highest rate of melanoma occurred on the trunk of the body as opposed to the head and arms which are commonly exposed to sunlight.  This shocking study revealed a protective role provided by regular exposure to sunlight.

The type of cancer that full-spectrum light mitigates is not limited to skin.  A ten-year epidemiological study conducted at Johns Hopkins University Medical School in Baltimore, Maryland, confirmed that exposure to full-spectrum light, including the ultraviolet frequency, provided cancer protection to breast, colon, and rectal cancers as well as to skin cancer.

In a study undertaken by Dr. Ott and his associates, Lewis Mayron, PhD, Rick Nations, PhD, and Ellen L. Mayron, M.S., the effect of full-spectrum lighting in the classroom was tested on first grade students in Sarasota, Florida.  Using four classrooms, two as a control with standard fluorescent lighting, and two outfitted with full-spectrum lights, the researchers tracked the students’ behavior levels for a full semester, using hidden cameras.  Their results demonstrated conclusively that the students exposed to full-spectrum lighting had a marked diminishment of hyperactivity, whereas those in the control classrooms actually became more hyperactive.  A similar study in Wetaskiwin, Alberta, Canada, also showed that students in classrooms with full-spectrum light had less absenteeism and a higher academic achievement record when compared with classes conducted under ordinary fluorescent lighting.

In Russia, a full-spectrum lighting system was installed in factories where colds and sore throats had become commonplace among workers.  This lowered the bacterial contamination of the air by 40 to 70 percent.  Workers who did not receive the full-spectrum light were absent twice as many days as those who did.

Years ago, testing of elderly people in nursing homes unearthed a hidden epidemic of Vitamin D deficiency among people who didn’t get outdoors regularly.  Since then, researchers have discovered that indoor light, with its lack of ultraviolet  radiation, significantly impaired the people’s ability to absorb calcium through their intestines, no matter what diet they consumed.  This deficiency helped explain why the elderly experienced tooth and bone loss, bone fractures, and, when falls occurred, crippling.  Calcium absorption was also found to be vital for healthy nerves, bones, and teeth.

Light therapy is used to treat jaundice in newborn babies.

5.  Full-Spectrum Light Has A Positive Effect On Hormones

Scientists have recently made an exciting new discovery that shows how important light is for human health.  They found that full-spectrum light is directly linked with the activity of the endocrine system, which produces hormones. The physiology is straightforward:  Light enters the eye and hits the retina, triggering a message that passes along a nerve pathway to the pituitary and pineal glands buried deep in the brain.  These glands control the production of hormones, thus influencing sexuality, fertility, and growth, as well as the whole range of human emotions.  The discovery that light has an  influence on hormone production is significant because it helps explain certain mental disorders and depression that cause, or are the product of, hormone imbalances.

Full-spectrum of light is needed for good heath.  Since evolution has brought us indoors, away from natural light, to maintain good health while spending long periods of time in man-made environments, we need to be cognizant and intentional of how much we get each day.

Read part one of Susan’s Clean Green Lifestyle Series about the impact of walking on dementia and brain health here.